This time of year spiders start multiplying in the greenery of our canal, and naturally, spiderwebs soon follow. In no time at all there will be sticky webbing across windows, doorways and pretty much anywhere hospitable to our arachnids’ architectural efforts. And it’s this time of year therefor that the spider's sticky web gets incorporated into various areas of client work.

The spiderweb holds powerful magical sympathies that are especially well suited to tying and trapping magics. Consider for a moment how spiderweb has tensile strength approaching that of steel and you will begin to understand how it is that enchantments wrought with its aid are exceedingly difficult to break.  And by virtue of its metaphorical associations I have found it especially useful for tangling up liars and enemies in their own tricks. Similarly, men and women hoping to snatch a lover (especially if that person is already involved) might find the small eight legged predator’s ancient trap amenable to their questionable desires.

To tangle a manipulator in their own lies proceed by wrapping a black figural candle (baptised and dressed in reversal oil) in a large mess of spiders webbing while calling for their own words to tangle and tie them. Set it facing a mirror and sit back and watch as they get twisted up in their own schemes . 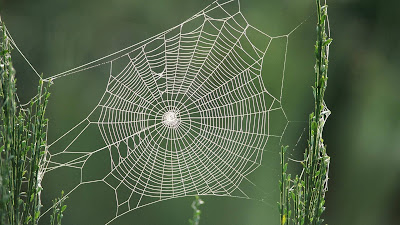