Oracle decks I have known and loved

I have been binging on cardboard (more about that in a bit) and I thought I should share some of my favourite oracle decks with a quick seat-of-the-pants review on each pack... 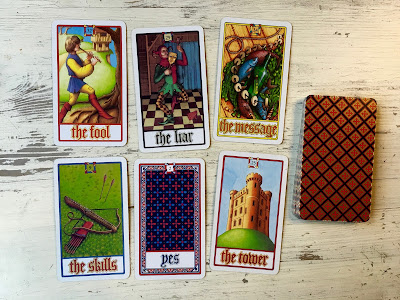 If you have never heard of Psycards then you have most certainly been missing out. This 39 card deck has been around since the 80s and it's seen plenty of use on my reading cloth since I discovered it a few years ago. If you are a Lenormand enthusiast then you will know that Lenormand and Tarot are very different in terms of how they read. Well, Psycards manages to bridge that gap, allowing for some of the precision of Lenormand (in terms of fortune telling) with some of the deeper, more psychological qualities of the tarot. It also gives surprisingly accurate yes/no readings due to the inclusion of "yes" and "no" cards. Sounds too easy? Try it out and see. The art is groovy watercolour and pencil illustration. No ugly photoshop mish-mash on this classic, folks. The author also publishes a short but good interpretation manual that I like. 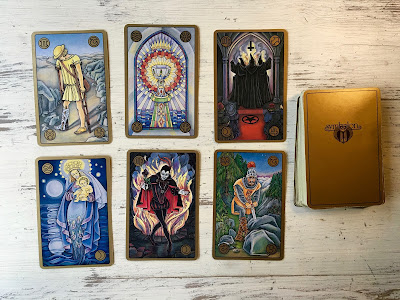 The mysterious Symbolon. This 78 card oracle is a German creation that fuses astrological symbolism with the author's modality of depth psychology, apparently. It is mysterious because all the books on working with the deck are in German and while the english LWB included with the pack does give a basic set of interpretations it's all pretty opaque. No problem! Just look at some of these cards; a hobbling Hermes, the holy grail, the Virgin emerging from the ocean - and my favourite - the black mass.  It's a no-brainer, really. Astrological glyphs included on each of the cards assist with matters somewhat. Lack of interpretive literature aside - it gives excellent readings if you just look at. Nice consistent colour pencil illustration throughout. 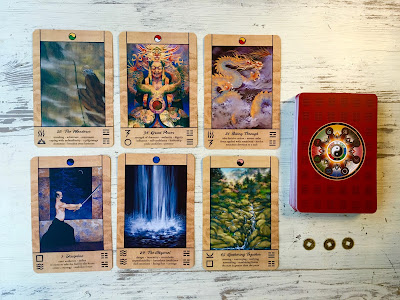 I have never seen I Ching derived cards that didn't stink. I think it's probably because the divide between the I Ching text, with all of it's profundity and multivalence, and any one image is simply too great. The Tao Oracle changes all that. It successfully fuses cartomancy and the I Ching, in my opinion. It comes with a tailored version of the I-Ching that works in tandem with the deck. Or simply use it as an oracle deck, if you want. The art is subtle and gorgeous. Natural imagery, rich colours, key words and pictograms give the reader cleverly nuanced visual expressions of the energy of each of the hexagrams. The Tao Oracle somehow manages to bridge the divide between oracular text and image. It manages to stay true to the spirit of the I Ching while being it's own (heavenly) animal. What's more, the card stock and finish is probably the best I have seen on any pack of cards! If you love the I Ching, I can't recommend it highly enough. My only gripe with it is that the fiddly method provided for deriving changing lines seems to rarely actually do so. This produces a locked hexagram, which is kind of frustrating if it happens too often. Certain locked hexagrams also give unlucky auspices (traditionally) which is unwelcome if it's only happening because the math is a bit skewed. I have a simple hack - roll a six sided die (such as found in monopoly) after drawing the primary hexagram to derive the changing line and thus the following hexagram. 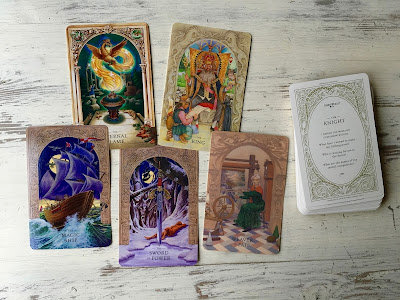 Not even an oracle deck, technically! These are the Storyworld cards. A storytelling game for kids. The cards are used as storytelling prompts in the game, with a key phrase and prompt questions on the back of each card. Never mind that. These cards are incredible oracle cards! The art is gorgeous, high quality watercolour and pencil for that lush storybook feel - and let me say this again - these are fantastic oracle cards. Characters such as the Weaver of Fate, the Sword of Power, The King (and Queen), the Mother (and Father), Daughter (and son), The Castle, The Endless Forest, The Knight, The Dog, The Cat, the Key, The Ship and the Crystal Cup, leap out at you from these large, deep and detailed cards. It's almost like these cards were meant to be divined with.

But hold on... the creators of this kids game also publish Tarot and Lenormand decks? That's right. This is no oracular accident, friends! Some lucky kids out there are being groomed for fortunetelling as we speak. What's more - there are expansion packs. This brings a dimension of deck-building into the whole affair which is either wildly exciting or financially perilous, depending on how you look at it. Especially considering some of the out-of-print expansions (such as the Animals expansion) on amazon seem to be going for astronomical sums. I can't get enough of these cards. Lenormand techniques work well with it while the glorious detail on each card makes it possible to use a single card for rich, intuitive readings. Fine tuning my deck by adding or removing cards amuses me no end. The readings it produces are imaginative, playful and usually very insightful. Recommended for diviners of all ages!

Posted by Balthazar at 8:11 AM