Transylvanian cure for the evil eye

Here is a wonderful bit of folk magic from a dear friend and client who hails from Transylvania, Romania. She is a gifted medium and budding spiritual worker in her own right; and described this method to me during a reading at my house recently. I invited her to share it in her own words with the readers of my blog.

“This is often, but not exclusively, applied to small children when people suspect that they could've been given the bad eye. This doesn't have to be malicious, if someone particularly admires the beauty of a child or pet for that matter, this causes that person/animal to get sick.

Common 'symptoms' of the bad eye: nausea, headache, lethargy, sick to the stomach, feeling 'off', crybabies. Especially after an encounter with someone outside the trusted social circle.

There are many variation to make it. In the old days people took out several pieces of glowing coals from the stove for this use. Nowadays they just use matches.
The ingredient are everywhere the same. The preparation differs in the way people pray over the water (kind of prayer, before/during/after burning the matches, amount of matches, disposal of the water, anointing the body parts)

Prepare this in the presence of the 'victim' 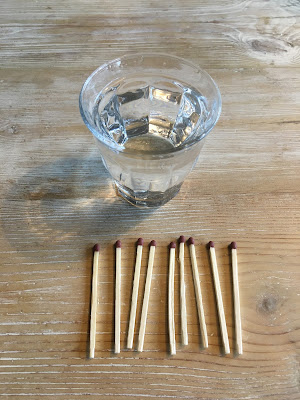 Light the first match and hold it in your right hand above the water. Let it burn as far down as you are able to keep it in your hand without burning yourself.
Light the second match with the first one.
While doing this, break off the burnt part of the 1st match with the 2nd match and let it fall into the water (not the whole match, just the part that breaks off)
Make the sign of the cross 3x over the water saying 'In the name of the Father, Son and Holy Spirit. Amen'
Light the 3rd match with the 2nd one, and continue as above dropping the burnt part of the match into the water and making the sign of the cross every time.
Continue like this till all matches are gone.

Pray the Lord's Prayer over the water.

Let the victim drink 3 sips of water from the cup.
After this dip your pointing and middle finger into the water and make a cross on the forehead, heart, both wrists and both foot soles of the victim.

Go outside and throw the water against the cornerstone of the house while saying something like 'as quickly as this water runs down, so shall the sickness of X pass'

People can also tell (divine) from the amount of sunken matches if the person was indeed given the bad eye. If the matches all float on the surface, it's not the case. The more matches are sunken the worst it is. On the different count of sunken matches one could also tell whether the bad eye was given by a woman or a man, but I'm not sure how that goes. I've been reading that this divining is also different depending on the area.

I have to add that is customary that the coal water is made by a woman, preferably a female member of the victims family.

(We were talking about either making a photo tutorial (or maybe a short video) next time she visits since there is a trick to the way the matches are lit, so stay tuned.)

Posted by Balthazar at 6:10 AM