Here is a quick spiritual cleansing technique that’s perfect for when you are out and about in an urban environment and found you have stumbled into some spiritual muck. Most bars and nightclubs, for instance, are spiritually grimy. Music festivals and other large gatherings can be a bit dicey too, especially if you are a mediumistic type. Headaches or a sudden queazy feeling are good indicators that some psychic slime may have attached itself to you. Unexpected or unwanted conversations with shady characters can also leave you feeling a little odd. Cleansing this sort of thing on the spot is usually preferable to leaving it for later much as washing dirt out of a cut immediately is better than taking a course of antibiotics later. What can be cleared up quickly on the spot might require more trouble and effort once it’s taken hold.

As a habit you can do this cleansing whenever leaving this kind of environment, preferably at the door (or at a threshold of some sort). The reason that you do it as you are leaving near the threshold is so that it stays behind as you go. No point in cleansing and then remaining for a few more hours, for obvious reasons. Do it as you leave. If no obvious door or threshold seems accessible then do so at the very next street corner you pass.

Here is what you do:

Grab some small change out of your pocket. Holding the change in your dominant hand brush yourself down quickly. Think of the change as a psychic sponge. Make sure to finish by brushing off the bottom of your feet. Inconspicuously drop the change and walk away. The inconspicuous part is important because well-meaning bystanders might see the money dropping, run after you and try to give it back. 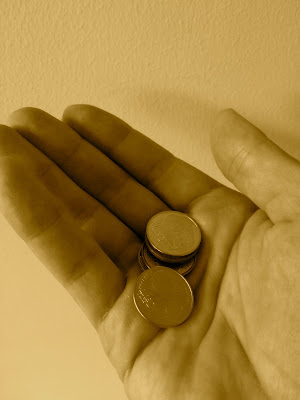 How does it work?

There are couple of ways of looking at it. The most important bit of folk-magical thinking at play here is that the gunk transfers from you to the money and then because money is sparkly and of interest to most people someone is bound to pick it up… and said gunk passes from you to them. A little mean but effective. Secondly, most spirits like money - certainly the sort of spirit that hangs out in bars and other venues of ill-repute! If you picked up an unwanted spirit passenger its likely to follow the money and stay behind at the door.

Posted by Balthazar at 4:04 AM