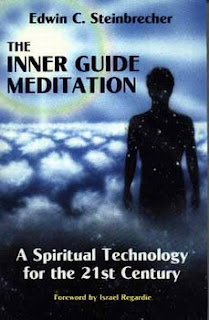 I recently became fascinated by The Inner Guide Meditation; a relatively obscure and idiosyncratic book first published in the 1960s, after hearing it mentioned by a Jungian astrologer on a you tube video. What made it interesting to me is that even though it's basically been forgotten by contemporary esoteric voyagers the ideas it contains have had an influence on most of the creative visualization based stuff that became popularized in the late 80s on through the 90s (including the neo-shamanic fad). By the end of the 90s if one more book suggested I visualize a cave or pasture where I could meet a spirit guide or step into a tarot card to dialogue with its image I gave my self complete permission to tear up the book and set the shredded remains on fire!

Steinbrecher, a jungian analyst turned astrologer, is probably the guy that sparked that whole genre of guided tarot meditation crap. The only thing is - the actual system that Steinbrecher outlines in this book is one of the most ingenious, creative and innovative modern spiritual systems I have come across; the quixotic love child of jungian concepts, astrology, tarot and the practice of active imagination. That watered down talk-to-a-tarot-card page filling nonsense that would become plastered across every New Age book store, in fact, had its roots in a remarkably unique system of inner work.

First I tried it out of pure curiosity. I couldn't resist. The book has the fevered tone of an eccentric inventor uncle who had been cooking up something in the attic and inadvertently stumbled onto bizarre new technology that had basically fried his brain. And he wants to tell people - if only they would listen!

Who can resist that uncle?

As I got drawn deeper into the inner map that this system creates I soon found myself being sucked down, down, down the rabbit hole. And I started feeling good. I mean really good. I wasn't sure if it was due to some sort of self-induced psychotherapy, play, magic or spiritism. But the pull became increasingly irresistible as my energy levels increased, new solutions to problems began popping up and blocks that had dogged me for years seem to be evaporating.

In some ways its been my dirty little secret because if you read the book you will soon discover it is ten percent C. G. Jung, fifty percent astrology, twenty percent tarot and twenty percent batshit crazy. And I mean CRAAAZY. But its the crazy that makes me love it. It's the kind of crazy that lets you know Steinbrecher stumbled and the plunged headfirst into something that worked. Perhaps a little too well.

So what is IGM?

Superficially it is a kind of meditation - a session of active imagining, really - during which you meet an "inner guide" who then takes you on a journey to the tarot images/energies. Scratch a little deeper and you soon discover there is a whole lot more to it than that. The real meat and genius of the system is in what Steinbrecher refers to as the horoscopic pattern. This is where it gets really interesting. In short, the practitioner of IGM takes their astrological natal chart and then translates it into the corresponding tarot images. Creating a kind of a map of the soul. Then, based on the aspects of the planets in the natal chart certain "high energy" pairs are identified. These are basically planets that have difficult aspects in relation to each other; square or opposition. Or, planets that are ill dignified in their zodiacal placements. 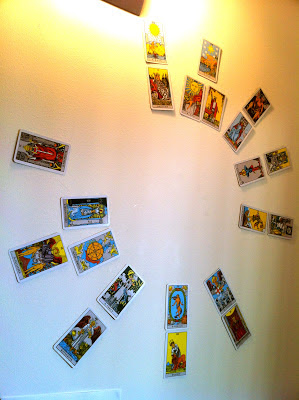 Then, under the tutelage of the Inner Guide you are taken to meet these troubled pairs (represented by the tarot cards images), and in these meetings you begin to negotiate a new truce between these forces in various ways. They tell you what they need from you to get along and also what they need form each other - and then upon agreement they either hold hands (forming a circle with you and the guide), change places or even merge. And in this, admittedly, twee way you begin tweaking and twisting the knobs of your soul.

The first time I had my astrologically opposed saturn and sun (represented by the World and Sun cards) meet and reach this sort of agreement, something astounding happened. The deal was brokered and I rolled my eyes as we all awkwardly held hands (as Steinbrecher prescribes) and I gave them permission to "balance". As I did so I experienced an unexpected, nauseating zap followed by what can only described as an hallucination. A nearly psychedelic whirlpool of garbage released; repressed images, violent movie clips, audible zings and zaps along with shouts and screams. Throughout my body a queer sticky feeling permeated. Within minutes it was gone and I was like, WTF? This effect was so notable, so unmistakable that what started off as bemused curiosity soon changed into fascination. I began reading and rereading the book and working through my whole natal pattern to see what would happen in each instance. Each day I would be surprised in a new way - not always as dramatically but certainly with a consistent sense of interest and energy.

Then the dreams started. Crazy ass dreams each night following an IGM session. Each session usually produced a relating dream and a certain dialogue became established. A call and response dynamic, as certain characters and symbols from the IGM appeared once more in the dream. I would take these back into the meditation and we would work on them again. I was hooked!

You see, the cards begin giving you little errands to run in exchange for their cooperation and pretty soon you are running around hiding a rusty key in the forest to appease Saturn, burning lists of names for Mars, sipping sea water for Cancer and doing all manner of curious things to please the planets. Your spouse begins raising his eyebrow at what is  quirky behavior (even for you). The Other Side is teaching, and you are changing but the whole thing gets the unmistakable quality of a child's game or quest. Its a great deal of fun yet at times desperately serious, uncomfortable and a little embarrassing.

Whatever it is - it works.

There are a couple of issues with the book worth mentioning. Firstly, as I mentioned there is a lot of batshit crazy stuff peppered into an otherwise brilliant system. Really whacky talk about adult circumcision as initiation, macrobiotic diets, alien vessels, meta-sexuals - and as was fashion at the time - a real fascination with kundalini experiences. I don't mind, these strike me as the artifacts of an unusual mind as well as the zeitgeist of the 60s.

Steinbrecher also had a pathological, and I mean FIERY, hatred of spiritualists, mediums and channeling. He spends many pages preaching sanctimoniously about and cautioning against "false guides", both inner and outer. I find this very amusing considering that there is so much of talk about working with the shadow throughout the book. It's obvious to me that Steibrecher was projecting his own shame an embarrassment at creating this lunatic departure from traditional psychoanalysis. His efforts to distance himself from the lowbrow hucksterism so prevalent within the spiritualist scene at the time is evident in these rants. Especially when considering that the core mechanism of his book involves working with a spirit guide! Steinbrecher even admits that in all likelihood the guide is not an aspect of the mind but a spirit of the dead. I can see why it is that the IGM method slipped into obscurity because he spends many pages insulting the book's main demographic of readership!

Nonetheless, even the author's repeated denouncement of what forms the core of my religious practice could not make me love this system any less. Sometimes you just have to nod your head along in agreement with your crazy uncle when he goes on about the spy helicopters above the house because you know pretty soon he will forget about them and start telling you about that cool contraption he built in the basement.

It's clever, it's creative and above all it's challenging inner work. This is probably another reason it didn't catch on because there is a whole lot of effort and discipline required here - the planets can be merciless with homework assignments. But if you do the work, the rewards are unmistakable.

Despite mister Steinbrechers protestations I would highly recommend it to anyone working in a mediumistic way or in a spiritualist-derived framework. It is an incredible way to tighten contact with the spirits and clarify mediumistic communication. You might call it kind of spiritist gymnasium where you can practice talking with (and listen to) the numinous realms. There is something unmistakably therapeutic here in a psychological sense too - so if you are interested in C.G. Jung then there is something for you here too. Hardcore Jungians will probably run screaming into the hills when they read how he has butchered archetype theory, however.

The most challenging thing at the outset is translating your own natal chart into Steinbrecher's "horoscopic pattern" of cards. If you are unfamiliar with astrological language this could be discouraging. Don't let that discourage you however! I am making myself available to do just that - so if you need your chart translated into the card archetypes, all you need to do is book a consult with me and I happily do so for you, provided that you send accurate birth information.

The astrology is another area where I have to respectfully depart from Steinbrecher's opinions because he seemed to adopt wholesale much of the nonsense of modern astrology - like attributing sex to the 8th house and reversing the positions of mother and father in the 10th and 4th houses, respectively.  He insists that the Inner Guide's appearance is determined by the sign on the cusp of 9th house, but, as we all know by now the Good Daemon is traditionally derived from the 11th house. Similary, some of his planetary attributions for the cards are a bit suspect. And I am personally inclined towards Donald Tyson's astrological attributions for the cards more so that the GD system (swapping The Chariot and Temperance around most notably, because, I'm sorry there is nothing warlike or victorious about the crab! And I don't care what Mathers had to say about it).

In practice this makes little difference because you soon discover the planetary energies are just playing dress-up in the tarot symbols and they morph and change into whatever forms they damn well please. Some of the most notable surprises for me were being introduced to the Emperor (Aries) as an alcoholic Jesus, or discovering that Venus likes morphing between Mary Magdalene and a Fairy Queen respectively - perhaps not that surprising considering that I have Venus in Pisces. Whatever the case may be you will soon begin learning a whole lot more about tarot and astrology because - as a side effect - you discover those symbols from the inside. That certainly was not Steinbrecher's main intention, though it really is a pleasant bonus.

Get the book. Steinbrecher deserves the recognition - and hopefully a new generation of IGM practitioners.
Posted by Balthazar at 4:08 AM 3 comments:

I was in need of some music to do inner work with. I wanted something trance inductive but most 'shamanic' drumming recordings are either terminally lame with flutes and Casio keyboard or just too boring, so I decided to remedy this in garage band by remixing a couple of tracks integrating overtone singing, atmospherics and tasteful drumming into a single 18 minute atmospheric journey. Enjoy!
Posted by Balthazar at 4:49 AM 10 comments: