The Garden of Souls: spirit pots, the dead and spiritualism


It's been a while since a posted and there is a rather timeous discussion going on over at R.O.'s blog about.. you guessed it - the construction of spirit pots! This topic comes up every so often and then we all thrash it out for a while trying to come some sort of inter-tradition consensus, which is basically impossible. What complicates matters is that the inspiration for the creation of these pots - this last while anyway - seems to come mainly from ATR's - and Palo Mayombe's Nganga specifically.

R.O. suggested creating, I guess you could say, a simulacrum of a prenda by putting a freshly dead human soul in a pot using a grimoiric approach. I of course protested saying it was a bad idea and so the discussion began, Jason piped up and Jack Faust also makes some very thoughtful and interesting points based on the PGM which I didn't know but are especially tantalizing threads of cross-cultural connection. Valid moral issues regarding the enslavement and desecration of the dead are also discussed. It's a rather good thread.

What's especially timeous about the thread is that I wrote an essay all about the topic for the At Crossroads published by Scarlet Imprint. Specifically, I discussed a certain contentious simulacrum of the Nganga found in Cuba and now globally (and indeed here in Amsterdam) called the caldero espiritual. 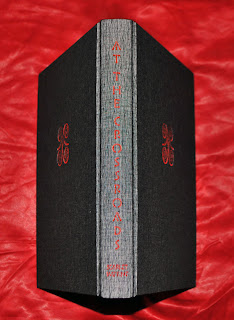 What is the caldero espiritual?

Well, it is a pot that looks and works similarly to a Nganga but is in fact not a true Nganga at all. So, as you can see it isn't only R.O. who is inspired to create nganga-like pots but in fact people in Cuba  and abroad have been doing it too.

As to the permanent emeshing of shades in matter, it is indeed more or less the standard to use criminals, or insane people because they are easier to manipulate. Sadly, it the philosophy also extends to children, aborted foetus's, and so on. In the case of a Nganga there is a lot more than just emeshing in matter that goes on. It is almost like surgical enhancement...  All that said, when I hear about graves being robbed or hospitals being raded, than traced to spirit pots, it kind of pisses me off. Religious freedom is one thing, but shouldnt the sanctity of remains also be protected?

Indeed. And this is one of problems that the wielders of caldero espiritual claim to address. This 'spiritual' cauldron has no enslaved Nfumbe - although it is still is a kind of necromantic nexus. There is more than one way to skin a cat, you see. Some also think that it is a lot more dangerous than a Nganga and many paleros believe it to be a perversion of the sanctity of their tradition. Yet, various forms of the caldero espiritual have been created and passed on for a couple of generations already and people do work with them successfully... There is a lot more to it than even this though, and I try to tackle some of the main topics in that essay but it's so culturally complex it could well be the topic of an entire book.

I mention this in part to plug At the Crossroads but also to point out that there are different approaches to spirit pots even with the Cuban religious continuum. The main thing that I would like to emphasize above all, however, is that there many other viable ways to work with the dead (ancestral or otherwise) not only in Afro-Cuban religion but in all of the diaspora. And most of them certainly do not involve plucking a soul out of the otherworld and sticking it in a pot. This seem to be the main go-to thing that western magicians want to do these days and I think it is due to frustration of wanting access to traditions like Palo but being unable (or unwilling) to get initiated to them.

To work with the dead you really don't need to stick a spirit in a pot. There are different approaches available in the diaspora and a very excellent one in western tradition too! Namely that great western living tradition of working with the dead: spiritualism

Spiritualism works SO well in fact that african-derived religions all over the Diaspora have quite happily blended western spiritualism into african traditions creating beautiful traditions such as: espiritismo cruzado, sanse, umbanda and many, many more!

It really surprises me that western magicians have not looked more closely at spiritualism as a way to start working with the dead. Why not start syncretising or synthesizing something along those lines? You don't hear about that. You hear an awful lot about Nganga-like pots being put together or running round the graveyard whenever the topic of the dead comes up. Yet, in the Caribbean it's spiritism that is the main vehicle for working with the dead. The reason is simple: it works so bloody well!

Perhaps, it is because we have a low estimation of our own magical history. In my opinion spiritualism was probably one of the primary thrusts behind the magical revival in the victorian era. You know, the revival that caused the Golden Dawn, Thelema and all the succedent ceremonial magical orders up to and including Wicca. The faux Egyptian headdress wearing bourgeoisie were knee deep in spiritualism, people! In the case of the Golden Dawn they are plainly documented as having used spiritualist techniques to talk to them pesky Secret Chiefs.

My point is that there is a ripe avenue for working with the dead that could be followed in much the same way that it was in Caribbean, but in this case by western magicians. And considering that spiritualism is in fact 100% western, cultural appropriation is much less of an issue. There are also very many good spiritualist centers around the world where you could just walk right in and meet experienced mediums to talk to and learn from.