The more I think about sigils in their various incarnations, I can't help but question what the function of all magical symbolism really is. As regular readers probably have realised by now I don't buy that the unconscious mind does magic. I'm not saying that the mind isn't involved in magic. Just that the mind is involved in magic the way that the landing gear of a Boeing 747 is involved in flight. While, strictly speaking, landing gear isn't keeping an airbus in the air - it probably is a good idea for the aircraft to have a well functioning set for take-off and landing. 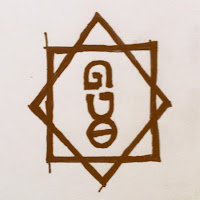 The further away I have moved from the notion that I need to manipulate my mind and instead focussed on building relationships with spirits, and refined ways of creating a sympathetic language with materials, the better my magic works. From my perspective, thinking that I have all the power inside my head can, ironically, be disempowering. My personal approach has been to move the locus of power away from myself and instead to think of everything in this world (and the other) as a potentially infinite source of spiritual power.

Resultantly, I have been working quite differently with sigils. The fact is I do enjoy working with sigils and sometimes they are exactly the right tool for the job. Granted, I have jettisoned every scrap of theory associated with Spare's sigil legacy. I certainly don't worry about the unconscious, or tricking the censor and all that jazz. It seems to me that in order to reconsider sigil magic intelligibly I have had to ask myself what sigils in fact, are?

The obvious thing about Spare's sigils is that they are symbols; signs or signifiers pointing to a desire. Plain and simple. The traditional method of constructing a Spare-style sigil is pretty arbitrary if you think about it. You have your statement of intent (which, incidentally, is already a symbol). You then delete all the repeating letters  - and take those remaining letters put them together to make a pleasing magical-looking symbol.

Nine tenths of the process is aesthetic. The step between sentence of desire and sigil seems somewhat gratuitous when you take into account that both the sigil and original sentence are already symbols. I mean - why create a new signifier (sigil) from an already existing signifier (sentence) to point at the same signified (desire)? Why not just activate the sentence of desire, taking into account that it already is a symbol? The sentence of desire's reduced letters themselves (also symbols), which are used to generate the sigil, when looked at as discrete components of the sentence, don't bring anything of particular relevance to the resulting sigil itself either. We may as well randomly select letters from a scrabble set and create a sigil from those*. So why all that agonising about the cleverly crafted sentence of desire when we just have to decide that the sigil these letters produce is a magical signifier pointing to our desire? And why is this resulting set of inky squiggles on paper more powerful, magically speaking, than the originating set of inky squiggles?

Compare this for a moment to the traditional method of deriving a sigil from a planetary camea. Now here we see some more structure. Some sound mythic logic. The planetary camea creates a cosmological lens so that the symbol/sigil produced isn't just an arbitrary construct based on an aesthetic whim but the result of extrapolating something out of a meaningful mythic pattern into the form of a symbol. As above so below yada-yada.

This is one of the reasons that I am a fan of the automatic writing method for deriving a Spare-type sigil instead ( Frater U:D:, Practical Sigil Magic, 1990). One enters into trance and then sitting with a pen one allows a sigil to be produced via automatic writing. It goes without saying that the spiritualist underpinnings of that approach naturally will appeal to an espiritista. Because now I can (like with the planetary camea) bring some greater forces other than myself down to bare in this situation - in this case a spirit is providing the sigil via automatic writing. This is far more meaningful and powerful to me for several reasons.

We use signs and symbols in magic all the time. We string together signifiers of all kinds; materials, colours, sounds, shapes, words, scents to create complexes of meaning. Looked at from a certain perspective we could say a black candle with a name carved in it using a coffin nail, dressed with black arts oil and sprinkled with graveyard dirt is a kind of performed three dimensional sigil. I admit, I winced a little as I wrote that.

Yet there is a crucial difference here; all the sympathetic resonance of the black candle, coffin nail, oil and graveyard dirt - like the planetary camea method - form part of the broader cosmological web of meanings in which a deeper pattern is activated. Graveyard dirt connects to a spirit; coffin nails to the grave; black candles to evil etc... we are sitting in that web of signification and we are plucking at all those strings in a very crafty way.

I want my sigils to do that - which is why it is important to me that my method of deriving one isn't arbitrary but instead is an extension of the cosmological underpinnings of my magical world-view. As you know I don't believe the unconscious is doing the work, so I have no need to encode anything to trick it. No need to sneak sigils past the censor. No need to forget or destroy sigils (which, thankfully, has gone out of fashion anyway).

If anything, my sigils are spirit-devices. We just need to look at the grimoire tradition very briefly to notice that sigils have primarily been associated with spirits of all kinds for hundreds of years. Similarly, in Kongo magic and in the Caribbean we find a prevalence of these kinds of spirit signatures - which is one of the more compelling overlaps between African and European tradition and another important attraction for me to the practice of using sigils in my work.

And here is the most important difference in my approach to sigil magic. Instead of creating a sigil and then going into trance in order to 'activate' it. Try going into trance and getting into touch with an appropriate spiritual intelligence then state your magical intention to them. Make an offering. If the spirit is interested and helpful you can receive a sigil from them. Chances are if you have been doing magic, and sigil magic in particular, you probably have somebody in your spiritual framework guiding you in this way already. This could be done through automatic writing, scrying, direct trance-based inspiration or something like, say, pyromancy. This sigil then effectively becomes a spirit signature that activates the spirit you are working with to work in a specific way for you.

There is correlation here, for instance, in the Kongo-derived practice of Palo. A palero can and does receive an innumerable number firmas (sigils) both through revelation and tradition that will set his prenda to work in different ways depending on the firma employed. The firma is then drawn and activated allowing associated magical workings to be performed atop it.

Looked at in another way the process of the sigil's revelation to you is its activation. Then it can be deployed in any number of ways in your spell craft just as you might work with any other seal, which I will go more into in a minute.

The key thing here is not the trance induction itself. It is the spirit contact. This ass-backward focus on trance induction by any means is the result of reductive, mechanistic thinking of magicians working from a materialistic scientific world-view. We want to reduce everything to some sort of physiological phenomenon because we simply cannot imagine anything else genuinely at play. So we think that if we can trick ourselves into a trance state - presto we have magic. Not all trance is created equal. Productive trance, however, is the human nervous system's natural reflex to an encounter with the numinous. While trance itself, as a simple physiological phenomenon, does not necessarily cause contact with the numinous.

In other words: not all altered states of consciousness are useful or productive nor does every altered state of consciousness bring you into contact with spiritual reality. But I can pretty much guarantee that if I were to bring you into close contact with a spirit entity you would almost reflexively slip into trance. Again, trance is the body's natural reflex to the presence of spirits. Focus less on inducing trance and more on befriending helpful spirits.


working with sigils in a hoodoo oriented, spirit-centric style

The simplest approach for starters (and not be underestimated) is to draw your sigils on petition papers used in conjure work as per normal.  You can stick them in mojo bags and paint them on glass encased candles - whatever floats your boat. Basically, I use them in much the same way I would use any solomonic seal typically included in traditional conjure because they are structurally and visually almost identical.

Here are some more ideas for working with them...


Basically, you can transfer your sigil directly or indirectly by means of one of the important cornerstones of all folk-magic: magical contagion.

I started this post by saying that the more I think about sigils, the more I question what the function of all magical symbolism really is. The conclusion I have come to, based in my involvement in the ATRs, personal experience and survey of magical history is that magical signification from the most subtle implications of a tiny gesture to the most dramatic explosive elements is a way of talking to the spirit world. We are entering into a dialogue with a numinous. We are miming the other-world into being this-world. For me it isn't just fancy dress for the unconscious mind - it is the conscious dissolution of the false distinction that there is an 'inside' and 'outside'.

By magically working with everything in our environment; herbal and mineral materials, sounds, colours, smells, and signs such as sigils as the manifest language of spirit we are demonstrating that our actual waking, tangible, physical reality itself is magic.

*And this to my way of thinking would work even better than the usual procedure. Why not enter into trance, talk to a spirit ask it for a sigil then draw letters randomly from a scrabble set and create a sigil from those? They might even mean something...
Posted by Balthazar at 3:30 AM 14 comments: