Ever the experimentalist, I wasn't entirely satisfied with the coin casting method - the most common method for generating the lines of the I Ching hexagrams. For those of us who worry about such things, I found it's a little time consuming, and the math is too symmetrical when compared to the more ancient yarrow stalk method. I would go for the yarrow stalk method but that's way more time consuming/complicated and I would probably end up avoiding divining with the oracle altogether if I had to do all that counting out of yarrow sticks every time I had a question.

Yet, the math appeals to me because the changing yin lines are less frequent, which mirrors the workings of yin in the universe (it changes less frequently). So, I started using what is known as the marble method - which is mathematically closer to the more ancient yarrow stalk method but relatively easy by comparison: sixteen marbles of four different colours are used; representing stable yin, stable yang, changing yin, and changing yang (1 marble of the first colour, 3 of the second colour, 5 of the third colour, and 7 of the fourth).

You just draw marble to generate each line. Not too bad at all...

Until I discovered these ingenious I Ching sticks invented by a Swiss man called Dominique Rollé and sold by Anthony Publishing Co. I'm not a mathematician but according to Carol Anthony  the sticks were designed so that the mathematical probabilities are close to the yarrow stalk method - but how cool is this - you generate the primary hexagram, changing lines AND the relating hexagram with a single cast!

You just roll the sticks in your hands while framing your question mentally... 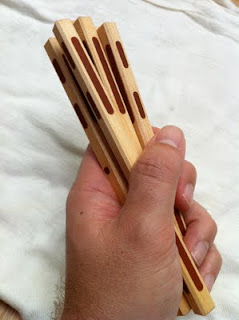 Until you feel the moment is right... 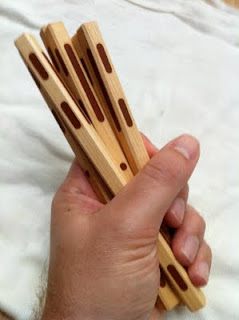 Then you roll them onto the table surface.... 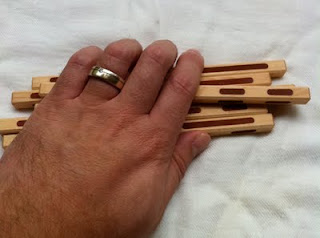 And presto - the figures and changing lines are generated in a single, easy movement. 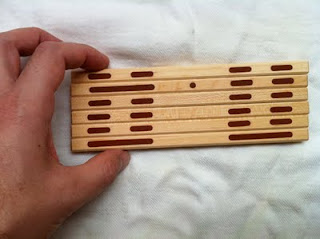 The hex on the left is the primary figure, the dot indicates the changing line (here changing from yang to yin) and then on the right we have our relating hexagram. Additionally, you can create small gap by shifting the sticks apart a bit to help identify the trigrams more easily - which of course helps one find the figure in the book but it also helps one to see how it is built up energetically. 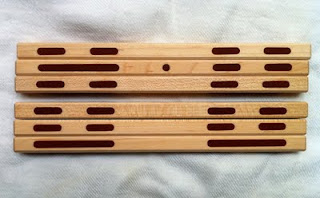 I also find these sticks rather aesthetically pleasing. I like passing them through some incense smoke as I formulate my question and then I find the rolling motion in my hands is suitably meditative. In a certain way they kind of remind me of yarrow sticks in terms of their kinaesthetic quality - but with a very modern twist.

There you have it folks - a better mouse trap.
Posted by Balthazar at 3:15 AM 6 comments:

The curious chinese map-book and diversity in your spiritual framework

It started with an impulse to take my dusty I Ching to Glastonbury. I had not touched the ancient oracular text in years. Like many I have had the very occasional insight with the book, but for the most part I found it terse, cryptic and too foreign to apply my own experience usually. I tried a different translation, but in the end all those changing lines made my head hurt. Better to open the telephone directory at random, phone up a stranger and ask them a question and interpret their ravings, I told myself. At least there would be no mysterious, impenetrably obtuse 'mountains over lakes' or any of those 'wet foxes crossing a river in the southwest'. Or whatever.

I obeyed the impulse anyway. Especially since it came with that, now familiar, vibratory ping that flashes down from the top of my scalp down to to my heels when I am being prodded by a muerto.

The morning of the workshop and misa I found myself up at an impossibly early hour in my hotel room. Pure agony for a late sleeper such as I. What to do? Out came the yellowed pages of my I Ching, and I attempted my first reading in years with it. It made an uncomfortable amount of sense too. As if a missing circuit in my mind suddenly had been hooked up and the lights of meaning all came on. I spent the next two hours before breakfast studying the reading's hexagrams - puzzled by the unexpected, yet helpful advice of the 3000 year old Sage.

Enthralled, I discovered ancient ancestors being pleased by great offerings. Large dynastic cauldrons filled with animal sacrifices. Angry ghosts troubling people (gui) and spirits of light (shen) descending from Heaven to Earth to inspire. Who knew the ancient Chinese were espiritistas too?

Later I joined Don Azito and Richard for breakfast, and as we ate we discussed everything we still had to get together for the misa that evening. Richard interjects to ask padrino if he would allow him to bring a bowl of uncooked rice to the misa. Rice? Yes, Richard explains - he has the urge to use the rice to cleanse people.

Some oriental flavoured coincidence begins to emerge. I mention my I-Ching discoveries, and we chortle about it as padrino nods along patiently.

Later that day Don Azito and I are hiking down from the Tor after having spent some time listening to neo-pagans drum as we looked out over the glorious vista. On our way back he notices a book discarded on the pavement. We pick it up only to discover that it's a map-book. In Chinese.

Don Azito raises and eyebrow and smiles broadly. I scratch my head; partly amused, partly baffled by the sign. Joking about the Chinese spirits in Glastonbury, we toddle down the main street  to St. Martha's botanica to chat with Jamie and Jack about the evenings doings. We enquire after some ribbons and other stuff that we forgot to bring for the misa and Jamie, very helpfully, begins looking around the shop for things that could fill in some of the gaps. He turns around holding up a pack of nine lucky Chinese bells with red ribbons attached - perhaps, he asks, these could be used in some way?

At this piont Don Azito and I couldn't help but to burst out with laughter.

And so the emergence of the Chino spirit in my quadro began. Bizarrely, it seems I had to travel to Avalon of all places to meet her. And along with her came my most recent obsession with the I-Ching, which is this 'new' muerto's tutelary sphere of influence, I feel.

This all sounds frighteningly eclectic, I know, but from the perspective of an espiritista this kind of development makes perfect sense. The quadro espiritual, you see, is built out of many different commisiones. These, roughly speaking, are 'nations' of spirits that all fall into some kind of ethnic and cultural grouping (usually stereotyped); Congos, Indians, Hindus, Gypsies, Oriental, Arab and so forth. In afro-cuban spiritist thought these are all a kind of egun - a variety of ancestral spirit which isn't strictly speaking ancestral, even though they they are part of the Dead. Rather, these are spirits with whom you share a pre-natal connection. An espiritista will usually have variety of them, each bringing with them their own wisdom, specialities, likes and dislikes. As Brujo Luis astutely points out - sometimes they don't all 'get along' either and battle for centrality in the framework. This can play out in the medium's life as a kind of metaphysical struggle as the espiritista is pulled in different directions; manifesting, at times, in a somewhat comedic dissonance as the impulses to chant mantras, do Hatha Yoga and read Patanjali at the invisible prompting of a Hindu muerto potentially overwhelms your other previous spiritual commitments - such as say feeding and serving your African spirits. It's the job of the espiritista to gently balance out these energies and integrate everything usefully in the quadro.

In a peculiar way this aspect strikes me as a somewhat post-modern innovation in the Caribean spiritist traditions. An elegant solution to the issue of globalisation in the spiritual sphere using the container of mesa blanca. You see this reflected in the constitution of the boveda too. As I have been taught - the large goblet in the centre represents your primary tutelary muerto and the smaller glasses that satellite around it are for these different 'nations', or commisiones. How many glasses exactly are put around the main goblet varies - but in our house we are taught that this number is to be given to you in a misa, so it's tailored to your spiritual framework. Some will have three, others seven or nine - all the way up to thirteen glasses could potentially be stationed around the central foci. Each holds the current of an individual commisione which, ideally, functions in harmony with the greater whole.

In practice this becomes a very handy way of integrating different wisdom streams into your spiritual life, all rationally 'contained' within the overarching system. This isn't necessarily based on choice. It happens organically and quite often at the guidance of the spirits themselves in the context of misa or otherwise through dreams and omens. At times you are shoved headfirst into contact with a certain spirit's current of wisdom energy. Even perhaps one you never gave much serious consideration before, such as say - a cosmic map-book from ancient China... 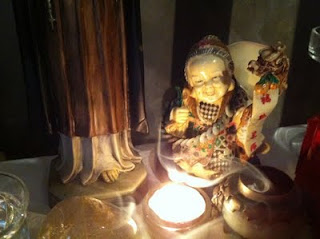 I would like to recommend you check out Brujo Lius' new blog http://sansespiritismo.blogspot.com/

It's shaping up to be an awesome blog about Puerto Rican espiritismo, also known as Sanse. This is a rare find in English let me tell ya. Our house has very strong espiritismo basis, and a slight Sanse flavour runs through our padrino's teachings - perhaps not all that surprising considering he is Puerto Rican himself.

Go check out Luis' site, he's already got a bunch of great posts up and I hope he keeps them coming. For some reason I haven't been able to leave comments yet - there seems to be some sort of glitch. I dunno if that is my mac browser's problem or the site template (Luis?) - so if you can - leave him an appreciative comment. It's the comments and feedback that keep us writing folks!
Posted by Balthazar at 1:44 AM 3 comments: