I have been noticing that much of the initial portion of consultation with folks who come for either rootwork or a reading focusses on reframing their concerns to some extent. Most readers will tell you that what clients want to know and what they need to know, frequently, turns out to be somewhat different.

And to my mind, this is what a good reading is all about discovering. Before you sit for your reading you have been moved by inner and outer forces to come out of a state of ambiguity and confusion into a state of clarity. That clarity doesn't necessarily mean you will feel everything is fixed but rather that the amorphous blob of confusion whirling around a situation has somehow crystallised into something more negotiable. You have come into touch with the underlying currents or energies that are at work in your situation. I don't use the word energies lightly here. I really do believe that a reading opens up a doorway to the raw 'stuff' that is at work in your life.

I was laying down cards and typing up the reading for someone late one afternoon when I found myself becoming a little woozy. I decided to leave the cards on my reading table midway and have a little snooze on the couch. As I was nodding off I saw something dark and mean coming at me. I leapt off of the couch, startled. When I looked over to the cards I briefly saw a flicker, a shadow, passing over that area. I later told my godfather about this happening, he just frowned and said that this wasn't at all surprising; "you left the door open."

I had left the door open, I realised.

It became clear to me that I wasn't just spying on destiny with little bits of cardboard, but that I was opening subtle portals to the spiritual world and its denizens who are operating the levers behind these events. Ever since I have become more formal in the opening and closing of my readings - so as to ensure that the door is always being opened and closed deliberately and firmly. 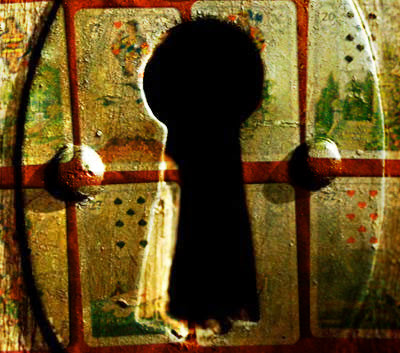 Nonetheless, when a portal to the causal stuff is opened consciously and artfully it can be a highly transformative encounter in it's own right. A magical act that potentially activates either the positive or negative underlying patterns latent in any situation. Hopefully, it is the positive threads we are able to tease out and the negative tuff we can dispel or otherwise avert. This can take the form of self-knowledge and skilful action certainly, but from my perspective its also about working directly with those energies in our spiritual work and magic.

This of course makes a very good case as to why readers should make sure they have good solid spiritual protection not only in the form of talismans/bags but also in the form of spiritual guides or helpers who work with you when you read. Along with this a good cleansing regime, which can be something fast and simple that you do on the spot before and after a reading, or something more elaborate such as a spiritual bath.

People who know my style won't need to ask what I think of the efficacy of visualising white light and other similar new age frippery. And you won't believe the amount of arguing I have to do with stubborn clients who suffer from persistent spiritual interference yet insist that these sorts of visualisations should be enough, and if they could just do them long enough or hard enough they will eventually work - right?

If it was enough you probably wouldn't be knocking at a spiritual worker's door!

Get yourself a basic plastic perfume spritzer fill it Florida water along with a dash of holy water, spray some on your palms, rub them together briskly and wipe yourself down and away quickly with a prayer. Clap your hands. Ring a bell. Take a bath. Do something physical to anchor the spiritual effect. It isn't that much more work, and it works. You really don't want to start seeing the issues that are disturbing the person your are reading for, cropping up in your own life.

Similarly, developing a clear closing routine after a reading is another way of ensuring that the energies contacted are disconnected from the reader. There are various ways of doing this based on your religious inclinations and world view. After saluting my spirits, I like to pack up the cards, make the sign of the cross over the deck placing it facing down on the table and put it away in it's pouch or box. I then cleanse myself with my Florida and holy water solution - or if the reading was especially troubling and I am picking up heavy stuff around me - I take the deck to my ancestral altar and I place it there and set a small white tea-light over it.

They watch the door far better than I ever could.

Certain old geomantic texts warn that if the figures Rubeus or Cauda Draconis appear in the first house, that the chart should be destroyed and the client sent away! Modern authors tend to dismiss this as an overly extreme reaction based on superstition but I am of the opinion that if you trace the origins of geomancy to the root systems it relates to such as Ifa in west africa or the diloggun in the New World, you find an identical response to certain figures appearing in a reading. The diviner will banish the figures' malign influence and cleanse, or in some cases when a figure is too dangerous - the diviner will immediately close the reading and refer the client to a priest of higher ordination who has been in initiated into working skilfully with the energies contained in that figure. I suspect the renaissance geomantic texts that warn that this sort of chart should be destroyed are a remnant of this african tradition. Considering the primacy of the first figure in the calculation of the totality of a chart it becomes obvious the power that a malefic sign there holds.

I haven't destroyed charts or sent clients away (yet). But I do take extra special care to cleanse and disperse the influence of that figure as soon as possible.

Conversely, one wants to activate and manifest the positive signs and energies revealed by the reading also - what the famous and totally awesome I-Ching scholar, Stephen Karcher, eloquently refers to as fixing the omen.

But that, dear friends, is a topic for another post.

Posted by Balthazar at 2:02 AM