The Greater and Lesser Mysteries

The role and difference between the major and minor arcana in the tarot is something that has interested me for a while. That difference is something I have struggled with, contemplatively and practically. It wasn't until recently after a new technique tumbled out of this struggle that I found that I have been able to frame my take on this as a coherent idea in some way. Maybe this of value to my readers.

My tarot perspective has been far more influenced by Paul Huson's historical and mystical take on the tarot than by any of that tacked-on qabalah. This concern has to do with my own idiosyncratic mission to sharpen my tarot as a practical real-world divination tool and brutally divorce it from its more recent application as meditation/psychological/self-exploration device. While those applications are perfectly valid of course - for me - in many ways they have muddied the divinatory accuracy of the tarot system itself. Instead of gleaning useful information about real-world happenings, it seems, one is more likely to discover inner perspectives or subjective symbolic patterns that might be meaningful in spiritual or psychological sense but tend to be less clear cut with regards to real-world events. Your mileage may vary of course.

Back to the majors and minors for a moment - how does one usefully and distinctly interpret these two types of cards?

Clearly they are 'supposed' to be different - both in function and interpretation. Yet, practically, during an average tarot session they tend to be read in a very similar way. Sometimes the minors seem to repeat ideas from majors and one is inclined to interpret both a minor and major of a similar character almost identically. This duplication seems awkward. The functional difference between the two parts of the deck is rarely addressed cogently within any structured tarot system that I have seen and certainly not in in any tangible way that is directly applicable as a reading technique. Rarely are the differences described in anything other than broad philosophical terms. Often the word 'archetype' gets thrown at the problem. At best the the majors are said to emphasise a particular concern. Having disabused myself of semiotic hall of mirrors brought later to the cards with assignment of qabalistic values, I have continually attempted to construct, frame or decipher the value and meaning of the majors in contrast to the minors within the context of a robust if personal tarot divination system.

One evening I lay soaking in the tub after doing a particularly puzzling reading for myself and something struck me. What does it actually mean when we say some of the cards are trumps? Why are they called major and minor arcana?

Trumps. Mysteries. I rolled these concepts around in my my head like two cool, round pebbles in a gurgling stream.

What if the cards are suggesting the emergence of a kind of mystery, or by association, some sort of riddle in our experience? What if we are looking at large and small riddles? And a riddle of course poses a certain conundrum; asks a certain kind of question. Macroscopic riddles vs microscopic riddles or mysteries.

I don't mean during a reading either. I mean in your life.

What if a major arcana card is announcing that you are about to grapple or are currently grappling with a particular unanswered cosmic question, a mystery, which is taking the form of a series of events - indicated by another order of cards in the pack: the minors?

From this perspective whenever a major arcana (appropriately then called a trump card) emerges in our story we are being asked to attempt to answer one of the twenty two big questions that we get asked endlessly throughout our life by that cheeky sphinx called Time. The major arcana card DEATH, for instance, would not necessarily be the arrival of an answer in a reading so much as it announcing the arrival of one of the great questions in our life. A living question that asks that we negotiate, over and over again with a great conundrum - the greater mystery of death, endings, termination, expirations, collapse, destruction and obliteration in this instance.

And when one of the twenty two great questions gets asked that question filters the entirety of an experience (whatever that experience displays as), through the mystery of that question. In the case of DEATH it might be asking us in a million different flavours, styles and guises: "human, what is dying, termination, expiration, collapse?" What does it mean in this scenario, or this one or this one?

By contrast then the minors would be the fifty six configurations of our mundane experience. Fifty six sets or scenes - like the scenes on the pips of the Rider Waite. And in this way fifty six possible configurations in which the twenty two major questions might infinitely pose themselves in the manifest world - so doing displaying as the minor mysteries.

Twenty two raw forces that ask to be known over and again; each moment arranging events in a novel pattern that we might discover their faces anew. 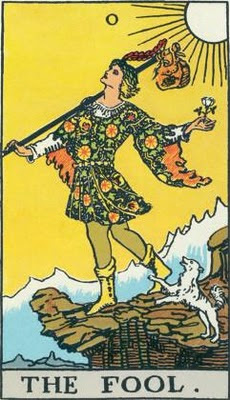 I hear you thinking - what on earth is he going on about? First he complains that the difference between the majors and minors has only been described in vague philosophical terms and then like the Fool he leaps off a cliff into pure abstraction! And right you are, theory should be validated by practice.

To this end the idea above can be applied within the context of an actual reading in several ways. Firstly by forming two distinct orders of interlocking interpretation neatly divided by the majors and minors. More than that it suggests a very handy interpretative device that makes use of that distinction - allowing us to add greater subtlety nuance and depth to any card's meaning and resultantly the reading as a whole.

This is done by taking the idea that a major is either of kind of macroscopic lens through which the minors are read, or conversely, that it is a force that expresses through a minor. How does this look practically?

Stay tuned for the next instalment of this post in which I will give the core technique that I have been playing with as well some spreads and other launching points for working with the ideas presented above.
Posted by Balthazar at 6:17 AM