The Lenormand Quickies: a reading

So, I have been working my way through, like, a zillion Lenormand readings - OK, OK I exaggerate it's more like thirty-five... ;)

Anyway, I would like to thank the folks who sent in their questions; there were some very interesting questions and then some pretty heavy ones too! Sheesh, put pressure on a guy why don't you!  So, with some of the heavier questions I couldn't in good conscience read using my practice Lenormand quickies alone so I have in some cases cast an extra free geomantic chart to confirm and elaborate on the cards - especially if the question seemed to be heavy or one that carried some special charge. So if I haven't got back to you yet it is because my 'quickies' sometimes turn out to be not so quick after I read and write up the cards and a chart. And in some cases I did extra geomantic readings just because they were so darn interesting I couldn't resist. My mother always says to me "Seuntjie jy weet hoe om a lat vir jou gat te pluk" - which translates as "boy, you sure know how to cut a switch for your own ass!" :)

I especially want to thank the querents who responded with feedback on the Lenormand quickies - the feedback is valuable and helps sharpen up my Lenormand mojo.

Anyway, as promised here is a Lenormand quickie reading for your interest and perusal...

It was for a querent whom we shall call W. - her question:

My boyfriend & I have been seeing each other for a bit longer than 2 years. We're both in our 40s and have had previous not so great marriages. Our relationship is wonderful. We have a lot of fun, delicious sex, enough common/different interests to keep things balanced. However, the dude just won't commit. Never mind that he doesn't really have time to see anyone else, he doesn't want to lose the possibility. So, my question is, should I continue with C. as stated above, or begin seeing other people? 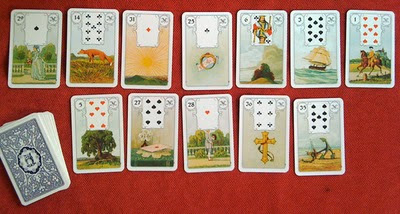 
The poor man seems stressed out about his work - it weighs on him heavily and is impacting on his inclination to commit. I think he sees problems ahead with his career, or worries about it a lot.
The cards suggest that you were perhaps a little devious in the past and tried to conceal it by pretending everything is rosy - you might find he is aware of this and it made him a little cautious. The good news is this period of non-commitment looks temporary and it seems like it might well come to an end - probably after he resolves an important business matter that he has been working on, or feels his career is in a stable place he is satisfied with. It seems his past has influenced him in a such a way that expressing himself takes time, possibly he even communicated to you that it would take time - so he might think that you are willing to wait.


I would say yes that he will commit, you just have be a little patient, it seems he is preoccupied with his work and until he feels secure about that he might not be ready to take that leap.

Yep, that rings pretty true. He is starting a business, just sold his family home, is seeking funding for the business...I think some patience is in order.
I read my Tarot using court cards for C. & me, and the first major arcana for what action to take, and I got Death reversed...so that sounds like "just hang in there" too.
Thank you! It definitely makes things more clear.


More on the Lenormand technique used above:

One of the cool features of the system is that it works by using key cards and one of the ways a reading can be done, is by searching through the deck (keeping it in order) for the key cards related to a question, and then reading cards that precede or follow the key cards in the deck. So to clarify: you might ask the question, shuffle, and the go through the deck until you get to the key card appropriate for the topic and the draw out the cards, in sequence the precede and follow the key card. In this case above I use two key cards; the ring (for commitment) and the gentleman (for her boyfriend). These cards are then are all combined with each other and the key card to generate meanings. It's a kind of divinatory filtering system, that ensures you get to the information you want and is relevant to the topic, making sure that the spread is talking about what you need to know. I think that's pretty neat! What is interesting is that you will notice that the tone or 'energy' of the deck is rather worldly, or I suppose you could even say mundane - dealing with day to day events and symbolic language. A helpful thing when dealing with such things, if you ask me.
Posted by Balthazar at 6:52 AM