When we approach spirit work in its varied forms we do so from the valid position of wanting practical favours and constructive influence in our lives from the spirits. Certainly when working with spirits, magically, we are coming to the work with this as our primary aim. What sometimes gets missed however is that a spirit doesn't have to give you what you want every time. As in any other relationship there are times when you can count on a person and times when you can't. Nobody will do as we please every time we ask. Sometimes they will say no. Sometimes they might misunderstand us and do something else entirely. Sometimes they don't have time or they don't agree with what we want. Perhaps they are annoyed with us regarding an infraction of some sort - or perhaps we are only nice to them when we need a favour.

The biggest challenge in doing so is avoiding what one might call the Genie Syndrome. When caught up in the Genie Syndrome our understanding of the spirits is as two dimensional as the chromolitho print or sigil that depicts them. They become wish granting machines that we 'use' instead of petition. If you watch the language you slip into when discussing your spirit workings you might be surprised that you yourself slip into Genie Syndrome talk. They have no personalities, or even any input to offer from the perspective of the person caught up in the Genie Syndrome - what they are to us is defined, very simply, by what they can get for us. "X spirit is great for money magic" you might say, further flattening out any subtlety or identity from these living non-corporeal beings.

Treating spirits like Genies naturally then leads to Genie-like behaviour from them. When they are robbed of voices and reduced to the role of spiritual prostitutes, they begin teaching the way the Genie teaches in the stories - by tricking the owner of the lamp, by imbedding lessons in outcomes of wishes that were never what he wanted but exactly what he asked for. They teach by trial. Eventually the owner of the lamp grows up - and either gets rid of the lamp claiming it is cursed and should be buried deep under the desert sands, in a vault, or frees the Genie making a friend that might not grant his wishes all the time but no longer intentionally torments him to teach him.

At the heart of Genie Syndrome lays the implicit suggestion that the Genie does not really exist as a separate living thing at all. 'It' is just a means to an end, a tool, a device to be used at the whim of the mighty magician. And imbedded beneath this conceit lays the inflated importance of the role it is imagined the magician has in the world of the spirits - a role which somewhat mistakenly conceives of the magician being at the top of the hierarchy blasting out commands, instead of something akin to a small squirrel running headlong into eight lanes of oncoming traffic.

Free the Genie - you need all the friends that you can get. 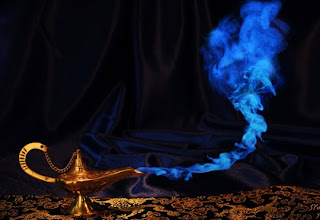 Posted by Balthazar at 2:42 AM