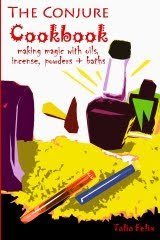 I found this little gem because the Rev. Jim from the Church of Good Luck mentioned it on a yahoo group. I respect Rev. Jim so I picked it up based on his recommendation and I must say it really hits the spot for me. The Conjure Cookbook (by Talia Felix) includes 200 conjure formulas which itself is a rather rare feat considering the secrecy with which most manufacturers shroud their recipes. Miss Felix admits that at least half of these formulas, even though based on traditional products such as Crown of Success or Black Cat, have been invented or mimicked based on her knowledge of hoodoo and occult formularies. And she does a very good job where she has done that, in my opinion. What's more is that with every formula she includes she provides her source and some information in the back, which is very interesting and helpful.

But what is worth the price of entry alone is the substitutions list, which is very cleverly crafted and based on hoodoo herbal lore so that one can intelligently substitute using the traditional magical properties of the herb or root in question. Additionally she offer a substitution list by frangrance! Her introduction is clever and she points out there are almost no 'one true' formulas, but that manufacturers and practitioners all have their own methods for deriving even commonly found condition blends.

This is a well researched little book and what I love about it most is that it will encourage practitioners to make their own stuff, and in a handy way has offered a toolbox that will undoubtedly aid anyone in doing just that - which in my opinion empowers spiritual workers. Not everyone will want to do this but everyone should at least know they can.

My only quibble is that Miss Felix offers no pointers as to how would-be spell crafters might go about enlivening their own creations through prayer or ritual, and whilst it is true that in conjure the roots and herbs are understood to hold their own power there also is a tradition of blessing and empowering oils, powders and other formulas to fully potentize them. This is another good reason to make ones own stuff when ever possible or practical, because you know for sure that you have prayed over that oil daily for a week (or however long it might be), whereas if it comes from a shop or botanica there is no certainty as to the quality of herbal ingredients much less the spiritual preparation of the product.

This little niggle aside, I am very pleased with this book and it already has proven to be very useful and happy addition to my library.
Posted by Balthazar at 7:07 AM 7 comments: 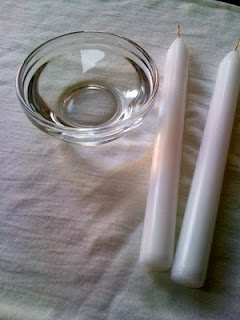 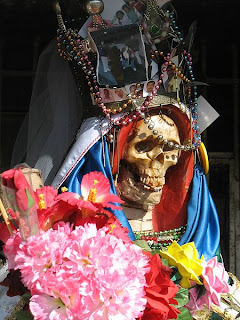 I was sitting in front of my Santa Muerte altar this morning praying quietly, with an offering of water and candles.  I wasn't petitioning her for anything but just spending some time in her presence. She has been in my dreams. People sometimes focus on her fearsome reputation to the exclusion of all else. My experience  is that she is a very sweet and beautiful spirit. Serene, kind and wise. Whilst some might describe her as 'hot' to borrow a term from the ATRs (which may or may not be useful in the context of this spirit) to me she comes across very graceful, holy and cool. I cant say why that is exactly - nor how it came about that she got linked to such heavy stuff (and I don't mean black magic). Although, there is no disputing the fact that sometimes seemingly sweet spirits can have a very dangerous side.


Anyway, I was sitting praying very quietly and it was, for lack of another word, very blessed. I finished up and sat down at my laptop and almost immediately came across this curious little piece of writing, and in the most unlikely of places too. It was like the Bony One was talking directly to me in that moment - like she had arranged this little meaningful coincidence. So, I thought I would share this piece of writing - which seems special to me today. More than that, it seems to communicate a perspective - perhaps the true message this special saint brings  - a message sometimes obscured by her other associations :


Ready or not, some day it will all come to an end.


There will be no more sunrises, no minutes, hours or days. All the things you collected, whether treasured or forgotten, will pass to someone else. Your wealth, fame and temporal power will shrivel to irrelevance. It will not matter what you owned or what you were owed. Your grudges, resentments, frustrations, and jealousies will finally disappear.


So, too, your hopes, ambitions, plans, and to-do lists will expire. The wins and losses that once seemed so important will fade away. It won't matter where you came from, or on what side of the tracks you lived, at the end. It won't matter whether you were beautiful or brilliant.


Even your gender and skin color will be irrelevant.


Living a life that matters doesn't happen by accident. It's not a matter of circumstance but of choice.


Choose to live a life that matters...


After some googling I discovered was written originally by Michael Josephson.
Posted by Balthazar at 3:45 AM 3 comments:

How cool is this! Now I just have to get my act together and get my rear-end across the pond to attend...
Check out the Old Style Conjure social network to get all the buzz. 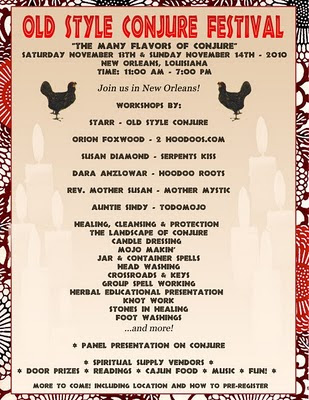