You may have noticed things have been quiet at gnostic-conjure these last two weeks or so and that is because I have had to travel back to africa to sort out some immigration paperwork and take some time to visit my family and friends back home.

I had the opportunity to stay with a friend whose home is built atop one of the hills on the high veld. He casually mentioned that the tree next to his home had been struck twice by lightning. That's right, twice! I thought lightning didn't ever strike the same spot twice, but he swears that this tree got hit hard twice. Well, I could barely contain my excitement as we made our way round the back of the house, where I found that the tree had almost split in half down the middle from these strikes - bark peeling back in a rather visceral manner. It looked like the tree had burst out of it skin in parts. He says that the tree nearly died after the second strike but after some time came back to life again.

I asked my friend if I could take some of the wood that had peeled away from the split areas and to my delight he said I could take as much as liked. I greedily ventured up the tree and broke as many pieces off as I could without injuring the tree, trying to get the wood from the areas that were around what seemed to be the place the lightning had hit the hardest. 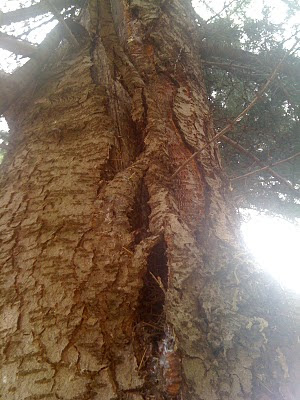 Lightning-struck wood can be used in conjure to bring extra power to magical work. Just a bit is all that is needed and the energy from this wood is absolutely crackling! I incorporated some into some candle work that I started a few days ago, by sprinkling some of the powdered wood on the candles and boy oh boy... wow, the result was nothing short of spectacular. My expectations were high so I was nervous I would be a little disappointed  - but yikes was I pleasantly surprised! The result came out of left field, like, well, a bolt of lightning.

In addition when I worked with it there seemed to be a tangible electrical sensation on a spiritual level. I am pleased, to say the least. If anything, based on this one working's outcome I would say that the results can be a tad unpredictable. But in this case that's not a bad thing - I got what I wanted just in a totally wild and unexpected manner at a blistering speed. And I mean fast. 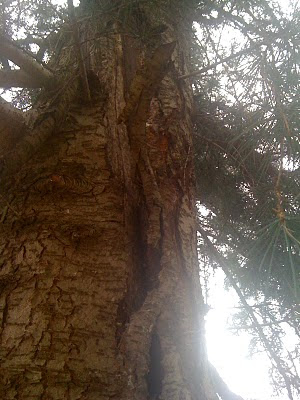 I am looking forward to working with it more and getting to learn about it's spiritual properties. I also think the fact that this wood was struck twice makes it rather special. I feel privileged to have been gifted it by spirit!