As part of my ongoing celebration of the ancient art of lamp magic, I bring you a Road Opening Lamp. I love lamp magic as you can probably tell by now. The magic lamp is like the vigil light's older, bigger brother combined with the extra power of a container spell. They work fast, and they keep up a formidable magical pressure until results manifest.


This lamp sweeps blocks and hindrances from a person's path that may be barring progress or success: to open the road. I prefer hand-making magical lamps using a fireproof bowl or dish, vegetable oil and cotton bandage. Working like this I can empower every part of the lamp; praying over the wicking, oil and ingredients as it is put together ritually. The building of the lamp itself becomes a sacred act. Additionally, because these sorts of lamps burn using vegetable oil as fuel they are not smelly like kerosene. You could conceivably adapt this working to a kerosene lamp but I would not recommend it. Traditional, vegetable oil burning lamps are truly ancient magical devices evoking both biblical and classical Hellenistic tradition, as well as seeing wide spread use throughout the New World traditions today.

Set up an altar space for St. Peter with his holy card or statue. Offer glasses of water with a few drops of Florida Water added. Place the dish or bowl that you will be using as your lamp-well on the altar in front of these. Place your petition underneath the bowl, dressed with road opening oil in a five-spot pattern. Be sure to add some personal concerns folded into the petition so that a strong magical link is created between the lamp and the client. If necessary tape these to the bowl.

The crossroads dirt you will want to collect from a crossroads that feels, well, open. Trust your instincts. You don't want to get dirt from a congested intersection where there are many accidents. An intersection with a church is excellent. I sometimes get my dirt from from a peaceful crossroads in the forest. Leave a small offering for the spirits of the crossroads when you take the dirt, specifically asking that roads for the client in question be opened. One Hyatt informant recommended an offering of whiskey and salt*. I found whiskey and a few coins will do nicely too. How do you collect dirt from an intersection with asphalt? A dustpan and hand broom that's how! You wont get a bucket-load but you will get enough to use in a spell.

For the keys: find two keys that speak to you, that whisper the promise of opened doors. They need to be roughly the same size and not too large - so they can rest easily on the bottom of the bowl. I have a jar full of old keys of different sizes that I have collected and whenever I use any in my conjure I spend some time with a pendulum and my intuition selecting the perfect key for that job. Keys are powerful conjure objects, each with its own magic and personality. Some keys look like they are meant to open doors, others look like they are supposed to lock doors. Make sure to pick two that feel like they will open doors in this case. The keys of course represent St. Peters keys with which he was given the power to open and close all doors; to lock or unlock the gates of heaven itself, as the bible says: 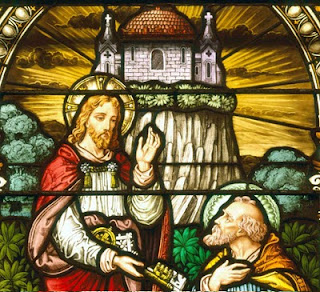 Firing Up the Work

Take a block of camphor and crush it mixing it with your crossroads dirt*. Deposit a large pinch of the dirt/camphor mixture on the bottom or the bowl or dish. Next place the keys flat (pointing upward to represent opened doors) on top of the dirt. Position them so they form an X, like this: 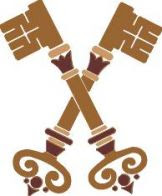 We are going to empower those keys with fire and prayer, to burn away the blockages and lay the foundation for the spellwork. Pour a decent splash of Florida Water over the key and dirt/camphor (but not too much!). Next, take a match and carefully light the Florida Water. As fragrant blue flames flare up over key and dirt you can extemporise a prayer spontaneously as the Spirit moves you, or alternatively, pray :

The effect of the keys blazing with blue fire is dramatic and releases a lot of energy which you need to direct into the work with your intention and prayer. Keep praying like this till the flames have burned down and the keys cool enough to touch without burning your fingers yet still good and hot.


Adding the Roots and Herbs

After having empowered the keys, and while they are still hot you should add the herbs: lemongrass, rue, hyssop, angelica root chips. Sprinkle these around the keys and dirt in a counter-clockwise circle. Be generous; the beauty of an oil lamp is that you can add so much more herbal material, all of which brings power. Not too much though, you still want to be able to see the keys. Add the bandage-wicking and tape over the tinfoil 'platform' which will hold the burning end up and out of the oil. Make suitable slit in the foil and thread through about an inch of bandage so that enough peeks out above the foil to act as wick. Then fill the bowl with the vegetable oil. Add some Road Opener and other appropriate condition oils such as Van Van to the vegetable oil that you are using as fuel.

Finally, petition St. Peter in full as you light the wick. There are many good catholic prayers one can use. Here is the prayer I use, it is comprised of several traditional prayers for his intercession as well including some words adapted for this spiritual lamp:

O God, Who by delivering to Thy blessed Apostle Peter the keys of the kingdom of Heaven, didst confer upon him the power of binding and of loosing, grant that, by the help of his intercession, we may be delivered from the bonds that bind us.

St. Peter, delivered from prison by an Angel, deliver N. from all bondage.

St. Peter, who rejoiced to suffer for Christ, free N. from all suffering.

St. Peter, whose very shadow healed the sick, heal N. of all troubles.

St. Peter, whose voice even the dead obeyed, command all hindrance to vanish from N's path.

Thou art the Shepherd of the sheep, the Prince of the Apostles, unto thee were given the keys of the kingdom of heaven. "Thou art Peter; and upon this rock I will build my Church." Raise us up, we beseech Thee, O Lord, by the apostolic assistance of blessed Peter, Thine Apostle; so that the weaker we are, the more mightily we may be helped by the power of his intercession; and that being perpetually defended by the same holy apostle, we may niether yield to any iniquity, nor be overcome by any adversity. Amen.

Try to get into a place with the prayer so that you can feel St. Peter's presence strongly. Speak to him directly, tell him your problems and ask for help. Leave the lamp to burn continually, refilling it daily; repeating the prayer, adding fuel and a few drops of condition oil each time. Keep it going like this until you begin to see clear signs that the road is opening. You might want to accompany the lamp work with a series of spiritual baths and other appropriate work such as house cleansing etc.

When the lamp's burning cycle concludes allow it to burn out and then take out the keys, wipe them off and tie them together the way they were using red and yellow ribbon. Set them at the front door pointing up*, along with St.Peter's holy card. Alternatively, if the keys you chose are small enough you could include them in a mojo bag. They have been empowered to keep the way open and will keep working as talisman to that end.

Bury the wick, herbal material and dirt from the lamp near your front door and if possible in the pathway, to keep the effect with you and your roads open.

The method of burning crossroads dirt with a cleansing agent to exorcise an unwanted influence, is drawn from  the material of Harry M. Hyatt.

Similarly, the method of buying the aid of spirits at crossroads is drawn from the Hyatt material.

The unabridged catholic prayers for intercession of  St. Peter.

Posted by Balthazar at 2:46 AM