I have been talking a lot about my work with the saints this last while so I thought it time to do some blogging with the other hand.


One of the many very interesting things about the Grimoirium Verum is the numerous ways in which one can approach the grimoire. Sure, you can go by way of the formal evocation procedure, creating all the tools and going the full ceremonial conjuration route - yet the Verum offers several fertile avenues for engaging with it's system or crafting practical spellwork that calls on its spirits - especially if you are coming to the Verum from a hoodoo perspective, as I am. This is where Natural and Supernatural Secrets in the second part of the grimoire really shines. This section describes spells that operate outside the text's primary ceremonial evocation context, while still drawing on the grimoire's system; offering several very interesting formulas -  or self-contained systems, really - that can be adapted successfully to produce new Verum based spells and workings. 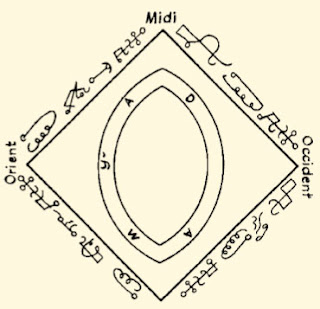 As mentioned, these smaller systems call on the Verum hierarchy of spirits, sigils and orations and apply them in rather practical and familiar folk-magical patterns that dovetail seamlessly with hoodoo, in my opinion. I mean, one exemplar piece of GV malefica uses spirit seals in conjunction with footrack magic and coffin nails for crying out loud! It doesn't get more old fashioned conjure than that. Don't even get me started talking about the implications of the lodestone and graveyard dirt in the book. The author of the True Grimoire gives some excellent hints for furthering Natural and Supernatural Secrets adaptations for practical spellwork. And when one investigates Secrets more closely in that light one soon begins to see the possibilities this presents to hoodoos with a goetic streak. Or goetes with a hoodoo streak, for that matter.


As mentioned, one of the reasons some might find the Natural and Supernatural Secrets chapter a useful entry point to start with the grimoire is that it offers stand alone spells which don't necessarily require a full ceremonial evocation. This might be attractive to those who feel a little wary of the blood pact mechanism of the core system.  Jake offers a very versatile adaptation from Secrets which is a parchment based talismanic spell system and derives from what he describes as the Verum talisman form. It's awesome, and it's very elegant but I wont say much more about it you should check out in the True Grimoire, the author will be able to describe it better than I.


However, many other possibilities remain, especially when one approaches Natural and Supernatual Secrets with a working knowledge of hoodoo repertoire. Much of what seems like straight-up malifica - which is to say: capricious spells that hurt or kill - are in fact clever conjure systems that can be used in variety of ways, to help or harm, especially as one begins to examine the versatility of the underlying principles of the spells. It then becomes as straightforward as intelligently substituting spirit names, sigils, orations and gestures in alignment with the new intention to have entirely different effect. Needless to say these spells use the Verum's spirits to expedite their working, as the grimoire notes: "In the second part are expressed the secret, both natural and supernatural which operate by power of the Demons"; which provides me with what experience has  proven to be the most efficacious means to practical magic: spirit-driven spellwork.


I am in process of conducting multiple Secrets adaptations that are extrapolated from these sub-systems contained in this (I believe neglected) part of the grimoire in an effort to develop this very interesting area further and I have to say I have been very pleased, both by versatility of the practical applications as well as the accessibility. I have been a little torn about posting more regarding all this because even though the spell permutations are reasonably straightforward in their overall conception and execution a lot needs to be said about relating these correctly, and safely, to the grimoires magical current and spirit hierarchy. Framing it thus is complex and I have written quite bit on my work with this so far, yet I am not quite satisfied to share it until more experience has been gained with it and the Verum as a whole.

Will keep you posted as things develop.

Posted by Balthazar at 9:26 AM