I recently had a wonderful success working a case with the aid of the kind and powerful St. Joseph. I would like to start the post by honoring him, spreading his name and I want to encourage folks to work magically with this saint when in need. He really does come through in the most miraculous way. He is frequently called upon to aid in the selling of property, but he is also known to help find jobs - since he provided for the saviour and the mother of God by working hard as a carpenter; this association makes perfect sense, being the patron of workers. 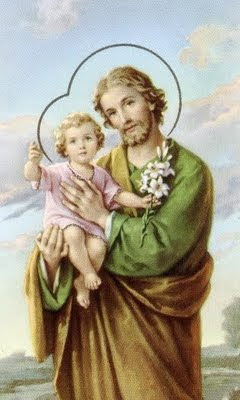 I performed a job-getting working for someone close to me and it was to find a job in a foreign country under very specific set of circumstances. It seemed like it would be a tough one due to the stringent requirements of the situation but I kept an open mind. Sure enough, within five days of beginning of the spellwork, potential positions started streaming in and it seemed that he would be spoiled for choice. Within a fortnight interviews were scheduled after which the best of the prospects immediately made a firm offer and the rest is history. In this economic climate this was rather miraculous especially since he had been actively trying for over six months to no avail. I attribute this result to power and kindness of St. Joseph. I will share the lamp powered formula I devised for interested readers.

I used lamp magic as the central part of the spell, but instead of using a kerosene lamp as is traditional in conjure, I created a bowl-lamp as is seen in afro-caribean magic. The reason is mainly practical; 'open' lamps are simple and cheap to create and are not smelly and obnoxious (as kerosene lamps tend to be). I also like to extract roots from the oil, later in the working - this would be impossible had they soaked in kerosene. Bowl-lamps burn with almost any vegetable oil so they smell quite pleasant and you can extract roots, loadstones and medals from them - all powered up from the lamp magic to include in a follow-on mojo hand, bath etc. as I like to do.

Petition written by client detailing location, salary and other requirements.

Personal concern of client (in this case hair from his head)

An altar space for St. Joseph should be set up with a picture or statue along with water with few drops of florida water added to it. Some flowers are nice too.

The petition is placed on the bottom of the bowl, the lodestone is blessed and baptized, naming it "Joseph", then placed on top of the petition. The lodestone is circled with salt and Gravel Root, covering the petition. Tell the salt what it needs to do to, because salt does what it is told. Salt is used in combination with gravel root for job getting traditionally. Next add a nice wad of five finger grass and cinnamon and place the HJQ root, mojo bean and medal on the petition paper too. The HJQ root will float on top of the oil - surprisingly, the mojo bean will sink! Pray over each ingredient as it is added awakening it's force to the work. Add a few drops of condition oil.

Tape the tinfoil over half of the bowl's rim, creating a platform to thread the wicking through. Roll the bandage, pass it through incense smoke and pray over the wicking fervently - firing it up with prayer. Poke a hole in the tinfoil and thread through the wicking letting about half an inch peek through the top. Fill the bowl with vegetable oil and place on the St. Joseph altar. Petition st. Joseph fervently and sincerely as you light the lamp. I take this part very seriously and like to get into a space with the work that I can feel St. Joseph standing in front of me. You will know when his spirit responds. Offer the lamp to to him. Feed the lodestone a pinch of magnetic sand by sprinkling the sand into in the oil over the stone. Say something like; "Dear Joseph as this magnetic sand draws to you, so you draw a job to X, as this sand clings to you, so job offers cling to X, as I feed you so you feed X, in the name of the Father Son and Holy spirit Amen."

Keep the lamp burning continually, pray and petition St. Joseph daily when you refill the lamp; each day feed the lodestone a pinch magnetic sand and add condition oil. Work it like this until the client has an interview for a position he wants then you can let the lamp burn out. Extract the HJQ root, lodestone, medal and mojo bean. Take a purple flannel mojo bag and put fresh Gravel Root and Salt along with the lamp's HJQ, lodestone, mojo bean and a fresh petition in it with along with prayers. Work it, tie it and smoke it - then neatly sew the St. Joseph medal onto the hand. Give it to the client to carry. Also give the remainder of the lamp wick - they should take the wick and add it to a spiritual bath before attending the interview. When they get the job; offering saint Joseph flowers as thanks is appropriate.

I work with a few saints regularly but St. Joseph is the only saint I have had approach me in a dream before I decided to work with him so I feel special connection to him. Ever since then he has been a blessing in my home and I hope others will be inspired to petition this kind saint.

Posted by Balthazar at 4:19 AM