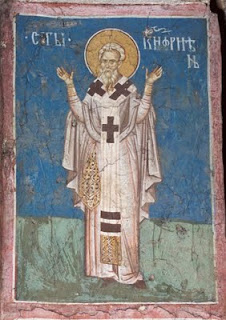 St. Cyprian of Antioch is an exquisite paradox and to my thinking a figure that mythically resolves the duality provoked philosophically when seemingly moral, thoughtful people decide to practice black magic. The question being: can one be a black magician and still be accomplishing a higher spiritual transformation?  And ultimately, what constitutes said transformation if not only ascent to the heavens?

The myth of this saint has many layers and angles, especially when one observes his veneration in the new world traditions and folk magic; one will find a complex and thoroughly occult folk saint - and as such, naturally, the patron saint of magicians; petitioned in cases relating to magic, spirits or spiritual cleansing. As the story goes, St. Cyprian was a great sorcerer skilled in the blackest of art; able to conjure legions of demons and perform terrible feats of sorcery. Yet his sorcery could not prevail against St. Justina against whom he was sent by a client to nab magically; one assumes for carnal enjoyments. She dispelled his magic by making the sign of the cross and he converted humbled by her faith and together they converted many pagans and later were martyred for their efforts.

Thats the official story. There is another side to this saint however. We find associated with this saint the dreaded black book of St. Cyprian; a grimoire famed and feared throughout the diaspora. What's interesting about it is the ambiguity that the grimoire provokes around the saint partly because of the mythos contained within certain versions of the book, purporting that St. Cyprian converted as a means to allow him to legitimately practice magic in a changing world. The grimoire describes all sorts of operations of magic; ranging from folk cures to curses and conjurations. It is related to the Grimoirium Verum, and we find parts of the Verum spirit hierarchy described within it. The book  has fearful reputation and at the same time sees widespread use in brazil's traditions of Umbanda and Quimbanda as well as in other folk catholic contexts.


Here we have saint with one foot in Goetia land and the other in Heaven. In a tantalizing way this figure is a saintly nexus of heaven and hell; a crossroads, if you will. As such we find he is petitioned by spiritual workers, umbandistas, quimbandistas and other magicians  when dealing with difficult, dangerous or unruly spirits. He helps one get control of the situation and acts as a kind of saintly intermediary to these more dangerous forces. He is turned to, for instance, by devotees of Santa Muerte when she gets out of control, in order to pacify what can be a rather dangerous spirit. We find a similar way of working with him in brazil in relationship to the legion  of Exus - who have a close relationship with deamons of Grimoirium Verum, which in turn has close relationship with the grimoire of St. Cyprian.

As someone who works magically with the saints I can attest to their power and willingness to aid. I was baptized in the faith and possibly this is one of the reasons I find my work with them so rewarding, but another is that by dealing with these spirits directly I have discovered another side of the tradition and christianity that is unmediated by consensus. Its living and very magical mythos, woven into the bible and throughout history and by working with it magically, really reclaiming it. Looking it in a new and broader, gnostic light.

St. Cyprian of Antioch truly embodies this magical vision for me and I thank him and spread his name as thanks for that grace.

Posted by Balthazar at 1:49 AM