The Root of Tarot

I have been reading the cards for well over fifteen years. Over time my style of reading has changed and developed. I have a library full of tarot books and I have embraced many of the newer trends in tarot. Choice centered reading being one; with which I mean using the cards to select possible futures rather than to predict a deterministic outcome. As a sorcerer this approach has always appealed to me, because after all - isn't magic supposed to be about choosing what we want?

Along with this style of reading I realize I have somewhat unwittingly absorbed a psychological interpretation of the tarot. One which puts value in the projective nature of the mind - that thing that allows us to see bunny rabbits in the shape of the clouds. This seems to be a rather contemporary trend in the tarot - which views the reading as 'therapeutic'. Lately I have started questioning this notion and looking to the tarot's divinatory grandmother- astrology, to see if it could enlighten my approach. Of course the major critique leveled at the tarot is that interpretation can be too subjective. If we look at traditional horary astrology for instance we find far less subjectivity and rather clear cut rules which are applied systematically to conduct a reading often resulting in a very clear cut Yes or No answer. And to my mind when conducting a card reading one also wants to be able to get this level of resolution. People come to the cards confused and hopeful; its from this simple impulse that we are asking most questions with the aim to bring clarity and insight.

Anyone who has some experience reading will realize how difficult it becomes to read for yourself regarding a highly charged emotionally issue. No objectivity is possible and the ambiguity in the cards become tangled in a maze of fear and wishful thinking. It becomes like a doctor trying to diagnose himself. Yet, herein lies the conundrum - I need to be able to do just that as magician. I need to diagnose the situation and i need to do this simply, succinctly and clearly without getting swamped with psychological material.

I am beginning to think that tarot has suffered the same fate as astrology did in the 20s/30s when it became appropriated, neutered and diluted; refashioned in the image of scientific materialism's new discipline - psychology. That catch-all vague amorphous science in which everything strange and related to human begins could be dumped; explained as being all 'in the mind'. Never mind that they haven't really been able to define what the mind or consciousness is!

Nonetheless astrology became a 'psychological tool' and as such it perversely became a tool that psychologists didn't want or use and fortune tellers couldn't wield to predict anything except the vaguest subjective blather. It was simplified and all the useful bits forgotten and had all kinds of silly new age twaddle grafted onto it; stewed into and bland brew of platitudes and psychobabble. Its only very recently that art was rescued and the old sources studied and the system more or less revived to be an accurate predictive device. Of course the Modern Traditional Astrologers feel so proud of their accomplishment that it seems this traditional revival has bred hordes or puffed up, self-righteous, imperious and most of all - tedious - 'traditional astrologers' who love nothing more than distinguishing themselves from the "moderns" by spouting ye olde medieval astrological aphorisms, lecturing everyone and anyone who will listen on the sublime science of traditional astrology as the epitome of human achievement. I hate fanatics.

But I digress! I was talking about tarot and my belief that tarot as suffered the same fate as astrology; subsumed in the flotsam of psychology and as such possibly having lost some its original crispness. I long for the days when a gypsy would turn a card revealing that skulled figure on a horse and pronounce, accurately, that within a fortnight you will be DEAD. Call me a romantic if you will, but I would rather be too scared to check the cards for fear that they were right, than have them be vague and 'psychological'.

These days the worst that you can wring from the DEATH card is 'transformation'. Ugh. Somewhere we went wrong in contemporary tarot. I mean i can give pretty good reading and have been praised for accuracy - but I want more. I want to be able to tell you your house will flood next week because of bad plumbing and that the pipe is going to burst on the west wall of the house because you got your cousin in to do it for a fraction of the price instead of getting a professional plumber. Horary astrologers can do this - why not tarotists?

So I am throwing out all my books, ideas and experience; putting away all my pretty decks and getting my old dog-eared Rider Waite pack out and starting from scratch. 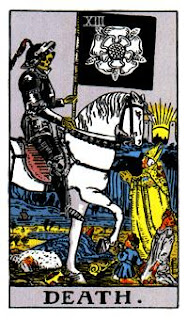 Posted by Balthazar at 2:19 AM