The Conjure Codex has been released by Hadean Press. I am pleased to say it includes an essay by yours truly and a whole lot more stuff. A brief synopsis of my piece:
Infernal Conjure Craft: a system of 'goetic' hoodoo
In this 9000 word piece for the Conjure Codex, I offer an approach to what some have called 'goetic hoodoo'; using for its basis the notorious Grimoirium Verum, and specifically, the subsystems of spell-craft encoded within the Natural and Supernatural Secrets of the True Grimoire. Drawing on hoodoo methods and more broadly from the magic of the african diaspora, I attempt to interpret and then expand the underlying spell systems held within the Secrets section of the grimoire, creating a fully operational, highly versatile system of 'goetic hoodoo'  - what I have playfully dubbed Infernal Conjure Craft. 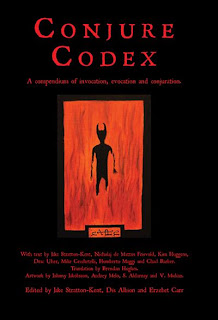 More from the Hadeans:
The practice of spirit conjuration has thrived since humanity first experienced and sought to work with the natural forces of the seen and unseen worlds. It remains to this day as a living tradition among many modern cultures, while in others conjuration has been equated with ‘the devil’s work’ or sidelined into the realm of the incredulous, viewed with superstition and disdain. Misconceptions abound, in part because the reality of spirit conjuration is often as obscured as are the spirits themselves.
CONJURE CODEX breaks new ground in presenting inter-related material from a range of traditions, embracing ancient cultures, the grimoires, New World traditions and others; by publishing new translations and rare texts alongside accounts of work in these traditions, and elucidations of them. We invite contributions including new translations and analyses of operative systems of spirit magic from around the globe.
TABLE OF CONTENTS
Editorial
Old Wizard by Jake Stratton-Kent
The Paladins of Earth and Fire by Nicholaj de Mattos Frisvold
The Tree of the Grimoires by Humberto Maggi
Modern Grimoiric Evocation by Michael Cecchetelli
The Comte de Gabalis by Abbé N. de Montfaucon de Villars, English trans. anon. with an introduction by Jake Stratton-Kent
The Great and True Natural Secret of the Queen of the Hairy Flies, trans. Brendan Hughes, with addenda by Jake Stratton-Kent
Language of the Birds by Humberto Maggi
Infernal Conjure Craft by Balthazar
Lessons from Ginen by Drac Uber
An Interview with England’s Most Notorious Necromancer: Jake Stratton-Kent talks about his practices and beliefs
Nefarious Occult Dealings: Necromancy, Ghosts and Spirit Expeditions in the Graeco-Roman, Hoodoo and Vodou Magical Traditions by Kim Huggens