The Tarot and Scale

One of the most interesting things about the tarot is how it responds to the scale of a question, by which I mean: the scope, the area of influence, the time frame or any other scale-based framework. A three card spread about your Tuesday will influence the scale of the tarot's symbolic language-response. The Hermit card in a daily spread might indicate some time of introspection - a contemplative quiet day. Perhaps you prefer your own company, or spend more time considering the change of the seasons - possibly you are a bit more reserved or decide to go off and sit in a coffee shop on your own with a book instead of lunching with your friends. In a year spread it will mean something much bigger.


It would have the same quality of the Hermit, yet its mystery will be blown up to a much larger personal and mythic level. Perhaps the sense of solitude now begins to extend to your living arrangement (you decide to move out of your shared apartment to get some space); or you begin to realize that the carousel of work, socializing and bright lights of the city hold no true satisfaction for you any longer. Perhaps you even are forced by circumstances to go on an unplanned sabbatical. At the scale of a ten year period the mystery of the Hermit will even more radical in its weaving. 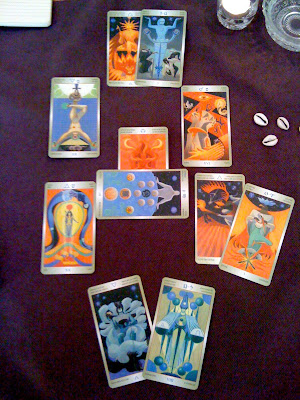 The tarot symbols; these greater and lesser mysteries, or arcana, weave themselves at different levels of magnitude, like fractals that are continuously repeating from the greatest cosmic level down to the tiniest psychological minutiae of our consciousness. The mysteries that cards reflect are forever scaling.


Keeping scale in mind can be a very handy interpretive device when looking at any spread. Considering the scope of the question in terms of time frame, area of questioning, and seriousness of the question, who is effected; we can begin to understand the language of the cards with greater accuracy. Usually, the more earnest the question the greater the scale of the tarots language and we can, quite truthfully,  begin describing the cards at that greater mythic order of effect to our querent. The cards always respond to serious questions with serious answers.

A question about about child-custody in a divorce case will bring forth a different order of interpretation to one of about repairing your beloved yet broken old van. This might seem obvious at first glance but it can be a major stumbling block for readers when they get the scale of their response wrong.

An interesting exercise to include in your tarot journal (if you keep one), is to consider: what does a card mean when looked at as speaking about a querent's day, week, year, a lifetime? What does it say to querent who is asking about something; trivial; personally significant, personally critical; life or death; spiritually or existentially pivotal? What does it say to an individual, a family, a city or a nation?

Posted by Balthazar at 4:44 AM